That’s right! Confusing Cassie is now available on Kindle and in KindleUnlimited! 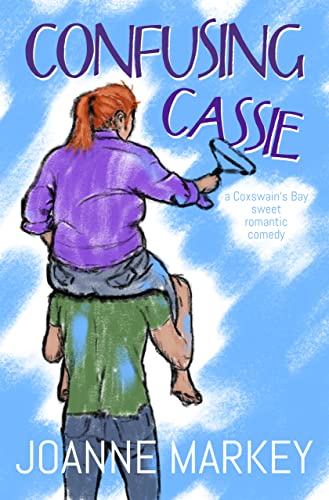 Here’s the blurb to tell you a little more about the story:

My name is Cassie Brand, and my life is a shambles.

To start with, I’m renovating my grandmother’s house in the hope of turning it into a functioning bed and breakfast soon enough to avoid debtor’s prison. Oh wait, wrong time period. Same difference though, because if I fall behind, Dearborn Suttle (aka Doofus) will gladly take the estate off my hands.

Why, I don’t know. Don’t want to know. Don’t even care to find out. But I will do anything to keep that from happening.

Including make a deal with the… devilishly sly, smart, and handsome, Jake Garrison.

It was supposed to be simple. I help him get back into the dating game, he helps me with this month’s loan payment. It’s all in the name of good friendship until… it isn’t.

Now I’m in over my head (and head over heels), and I think I just discovered that Doofus isn’t my worst enemy. I want to scream, “Make it stop!” but I think this disaster train was of my own making.

Hop on the Cassie train and enjoy the ride. You’ll be treated to slobbery kisses, flying hammers, and an unexpected heart-thumping romance you don’t want to miss.

I had so much fun writing this book. It all started with a single, tiny idea generated one night when I was walking back to the house from doing something. It was dark, the stars were out in full force, and as I was facing north at the time I searched the sky for any sign of Polaris or Cassiopeia. I don’t remember that I actually saw either, but the name stuck.

And from there it launched into, “My name is Cassie…”

But I wasn’t planning to write a first person story and pushed the idea aside. The more I ignored, the more persistent it became until the Friday night before Mother’s Day. I was stuck waiting on a kid with only my phone to keep me from getting too bored. I didn’t feel like reading, so I looked at my writing program. And just as quickly clicked out of the app again.

I shouldn’t. I should. I didn’t have to publish it if it ended up being dumb. I’d never written a romantic comedy before. I should keep working on the project I’d started…

Back and forth it went until I opened the app again and created a new file. Only on my phone because no one was ever going to see this story. I was writing it for me. For fun.

And fun it was. I didn’t open the file up again until the following night, but ended up writing long into that night. We were home the next day, and as Josh had the kids entertained with a lengthy miniatures war game, and we had pizza the night before which left plenty of leftovers so I didn’t have to do any cooking on Mother’s Day… I practically had the day to myself.

So I wrote. Frantically.

The story that started from one single word morphed into an entire book so quickly I couldn’t write fast enough. Cassie became a person with struggles and desires, a quirky sense of humor, and lessons to be learned. Other characters came to life as well, introducing us to the people who make up the small ocean-side community of Coxswain’s Bay. And a new series was born.

By nightfall I had 14 completed chapters with an ending I wasn’t super excited about.

I decided to change the story a little, so over the course of the next week I went back and rewrote several sections. Then expanded it into the book it is now and completely changed the ending. Eight days after I started, the book was done.

During that time one of my beta readers caught wind of a new story and demanded I cough up. So I did. Tentatively. With many a warning that I’d written this for myself and if it was silly or dumb or whatever, I hadn’t ever planned to let anyone else see it so she was reading at her own risk.

Bolstered by that news, I reached out to the rest of my team and… they loved it too. For the first time I actually considered publishing, and here we are, several months later, with a published book in our hands!

That project I was so determined to do instead of Cassie fell by the wayside. Because as soon as Cassie was finished, I dove right into the next book in this series, then the next, then I took a break to write a couple of stories for my publisher before I dove back in and wrote the fourth book in the Coxswain’s Bay series. My goal is to have all four books published by the end of this year, and maybe, if any new ideas strike, I’ll add a couple more.

I do hope you’ll check Cassie out and see what you think. The kindle and KU versions are both live. The paperback will be available soon.