Persuade Me release memories… The Roast

Not only that, but I set the book on the station where I worked.

Unlike Anne though, I wasn’t in my mid-20s when I started working there. I was a seventeen year old kid fresh out of high school.

Who didn’t know how to cook!

I could boil water, or follow a couple of recipes fairly easily, but almost everything you need to know to be able to cook was learned in that kitchen. Sometimes with Mum there to show me how, sometimes with someone else, and my Nanna even came over when she was visiting and spent some time showing me how to do a few things.

I’m a much better cook now and I understand all the ins and outs of recipes, and can follow directions, and I even try to make sure I do the same thing from one time to the next so we know what to change if we don’t like something! Back then though…

I cooked for the men at breakfast, had lunch fixings for everyone, and cooked for the boss’s entire family and all the workers at supper time. The boss and his family didn’t eat in the kitchen though, unless there were extenuating circumstances.

And of course, soon after I started working there we entered a time of extenuating circumstances…

The boss and his wife wanted a bigger house so they had a builder out to look things over and sometime after that his crew rolled up to get started. They all ate in the kitchen too, and because of the construction mess, the boss’s family came down for the evening meal.

All well and good.

But, the builders would take a break around 3 every afternoon for smoko. Their break lasted a little while—maybe a half hour or so—and they’d spend that time in the kitchen.

Which they did the day I decided to try my hand at a roast.

Except, I’d forgotten to pull it out of the freezer ahead of time. The builders were right there in the kitchen and I didn’t want them to see that I was late getting supper started, so I waited until they were gone. From what I remembered, Mum never put her roasts in until a few hours before supper, so I had plenty of time… right?

I tried my hardest to make that an appetizing meal with roasted potatoes, squash, and peas to go along with the roast—and gravy too. However, when everyone had gathered for supper and the boss carved the first slice… blood dripped out.

And it only got worse from there. The inside was frozen solid.

Don’t worry, I was right there, watching everything and crying. The boss cut some meat off the outside (it was a rolled roast) and other than complimenting the cooked state of the peas, he ate quickly and went back to the house.

Unlike myself, one of the builders could actually cook, and he took over, cutting the roast into pieces and quickly frying it up so everyone else could eat. No one who was there teased me about it, but it was a long time before I could think of that night without shedding a tear or two.

A week or so later I tried another roast (while the builders were still there, to prove I could actually cook one) that ended being so delicious when the last person to leave the kitchen forgot to latch the door properly… the dogs got in, pulled it off the table, and helped themselves.

I can honestly say, even now, roasts are not my favorite thing to cook. With as much certainty as I say that, I can also add that… Mum doesn’t wait until the last minute to put a roast in the oven. Not if she wants cooked meat to go with supper.

More about the book 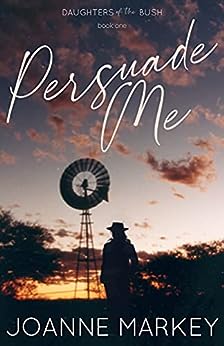 For seven long years, Anne Elliot of Kellynch Station quietly mourned the loss of her first love. Now that she’s finally over Fred for good, her sister offers the perfect escape: Uppercross.

This move, from one cattle station to another, offers new friends, new responsibilities, and now that she’s out from under her father’s domineering thumb, a whole new world of possibilities.

The sky is the limit.

Or maybe the sky is the perfect place for helicopter mustering pilot Fred Wentworth to spend his days. It took a while for him to regroup after their breakup, but now he’s back, he’s successful, and he’s put the past so far behind him he doesn’t even think about Anne more than a couple dozen times a day.

Or it was until he quite literally runs into the one person he hoped to never see again. After that, what’s a bloke to do other than rethink every lie he’d convinced himself was the truth?

Although they both seem willing to admit they were wrong all those years ago, when things take a bad turn, Anne is left to wonder… Is it too late for a reconciliation?

For today’s drawing of an ebook copy of Persuade Me, leave a comment and tell me one thing you cooked that didn’t quite turn out as you hoped. And as I’ve been doing all week, the drawing closes at midnight, but if you miss out, just come back tomorrow for another chance to win. I’ll be giving away another ebook copy of the book each day for a week (this is day five) so you have a couple more chances to win after today.